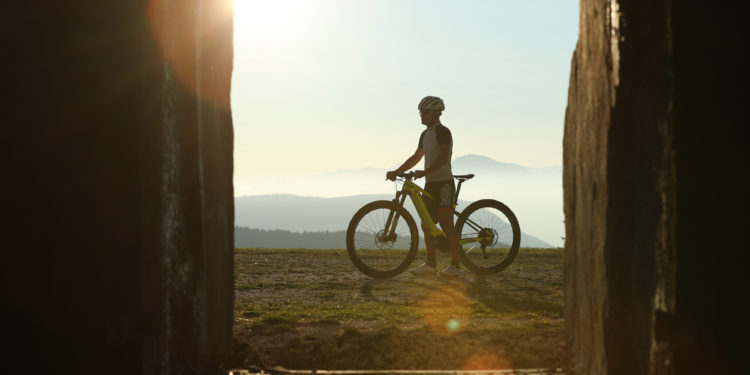 Trentino recommends the most interesting places for fans of two wheels:

Among the news, we have the inclusion of Dolomiti Paganella Bike in the circuit Gravity Card (https://www.gravity-card.com/), linking 24 of the best bike parks in Europe. DPB is the first and only Italian park in the region -> https://www.dolomitipaganellabike.com/it/gravity-card

A Bike Opening event is planned for the season opening: https://www.dolomitipaganellabike.com/it/eventi/-dp-bike-opening-2022, while for families, from June 16 to 19, the Family Bike Derby, with first rides in the bike park, testing equipment and trails accompanied by instructors.

The union of the association Apt Garda Trentino with the territory of Comano, Ledro and Valle dei Laghi has provoked fervent discussions, especially on the harmonization of the various trails, so we are now on an “ever-changing construction site”.

This year it has just started work Garda Rangers – a three-person team responsible for maintaining the trails and bike paths.

In addition, Austrian company Max 2 is preparing a new pedestrian and bicycle signage project. Work on its implementation will begin later this year and will take several years, resulting in a new concept of road signage for tourists. 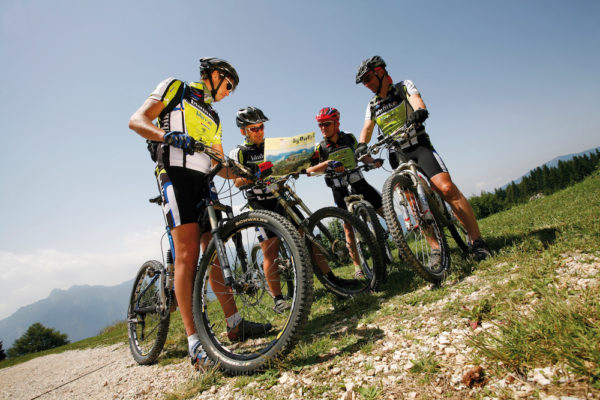 Discovering the Gravel Val di Sole Bike Land – a true paradise for fans of two wheels. The valley is full of forest roads and paths ideally suited for cyclists, perfect for lovers of the currently most popular type of road bike. A real open-air gym, where you can practice all types of cycling sports. Now the offer has been enriched with a new cycling discipline, Alpine Gravel, as if specially created to be practiced in Val di Sole. What distinguishes the paths located in the valley?

Here are the most important characteristics:

– Dedicated routes running at altitudes from 640 to 2,200 meters above sea level.p.m.

– Maximum height difference on the trail: about 1600 m.

You will absolutely need a Gravel bike, with min tires, to tackle these trails. 38 mm.

Just get on the saddle and set off to discover Val di Sole BikeLand. Riding through the valley’s crisp forests, on forest roads and trails ideally suited to cyclists, is an experience to be savored on the first two dedicated Alpine Gravel trails:

The route is about 45 kilometers long, with an elevation difference of 730 meters. Runs from Ossana to Cavizzana, starting at an altitude of 1,000 meters before descending to 650 meters in the lower part of the valley. The trail follows side and forest roads near built-up areas in the middle and lower Val di Sole valley.

Approximately 39 km between forests in the upper Val di Sole, from Fucine di Ossana to the Passo Tonale pass. A closed-loop route with an elevation difference of 1,200 meters, up to an altitude of almost 2,000 meters at the pass, near the border with Lombardy.

In 2021, the Val di Sole valley received an important distinction for the world of two wheels, officially entering the world’s 18 UCI Bike Region. This is the culmination of Val di Sole’s strategic vision in promoting all cycling sports: from the world of MTB to gravel riding to cyclotourism. Today’s offer of the valley is indeed very rich, and it is further enhanced by the annual important international meetings and extensive investment in the development of infrastructure and policies in the service of two wheels.

From the lake to the mountains (MTB)

This route (23 km) runs at the junction of the municipalities of Lavarone and Folgaria, crossing all the typical areas of Oltresommo. An important feature of this route is that it connects Mount Cornetto, reaching an altitude of 1530 meters n.p.m. in Schlicht, with Lake Lavarone (at an altitude of 1120 meters above sea level).p.m.). And it is this lake, awarded the Blue Flag, that is heavily trafficked in the summer because it offers refreshment and a pleasant swim. The route also connects all the villages in the Oltresommo area, such as Noselari, Carbonare, Cueli, Liberi, Tezeli, Perpruneri, San Sebastiano, Morganti, Virti and Parà di Sopra.

Route: from the center of Carbonare, take the path leading to the local play park and then up to the crossroads towards Mount Rust, turning right onto the road leading to Nosellari.

From Nosellari, at the end of the town, you take a gravel road going up the hill to the left until you reach Pra di Sopra, then pass the shores of Lake Lavarone, awarded the European Blue Flag.

Continue on to the village of Chiesa, from where the route follows the Ancino trail and, past the headquarters of the Austro-Hungarian command, reaches the village of Virti.

Having passed the Elbele malga, one returns to Carbonare, from where one should drive towards the Cornetto summit, taking the road to Fricca.

After the village of San Sebastiano, the trail continues uphill until it reaches the Passo Sommo, and from there the descent finally begins, first to the small village of Perpruneri, Tezzeli and Cueli Liberi along the waterway, until once again you reach the starting point and also the finish line: Carbonare.

This mountain bike circuit links the most important scenic, historical and natural areas on the Vigolana Plateau. The plateau, closed on two sides by the Vigolana and Marzola mountains, spreads out through a vast, gentle valley with a typically rural landscape, dominated in the lower part by fruit orchards and meadows, and on the slopes – by majestic coniferous, beech and chestnut forests. The closed loop route runs for the most part on gravel roads and consists of a series of shorter sections that can also be traversed on foot. They take their start in urban centers and are distinguished by red-and-white signs with the Vigolana logo and the trail’s identification number, No. 1. 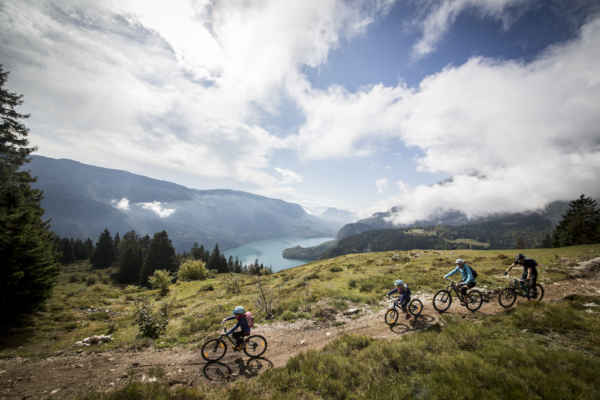 DoGa – from the Dolomites to Lake Garda – Alpine Cycling Route

DoGa is an abbreviation for Dolomita-Garda, the two endpoints on a new bicycle route that starts in Malè in Val di Sole and after 110 km reaches Riva del Garda. We leave behind the view of the rocky Brenta Dolomites to gaze at the olive groves surrounding the Mediterranean basin of Lake Garda, along side little-used forest roads in western Trentino; our route crosses four alpine valleys and 3 passes. As much as 51 km are paved side roads, 25 km of the route runs on sections of bike paths, 14 km – on main roads and 20 km – on forest and dirt roads. This route is designed to be ridden by any cyclist, at a pace of their choice. Recommended bike type? Gravel or Trekking.

Along the river runs

A mix of natural landscapes and lively villages, steep Dolomite escarpments and gentle hilly areas – here is an unforgettable experience, an encounter with the beauty of Trentino, lasting the entire length of the DoGa route.

On the first stretch you will be constantly accompanied by water – in Val di Sole and on the road towards Val Rendena, through the territory of the Adamello-Brenta Natural Park. The view of the mountain valleys, spanning the banks of the Sakra River, intertwines with the rural landscape of Bleggio and Lomaso around Comano Terme.

The final stretch crosses gentle, hilly landscapes dotted with olive trees: the route passes Lake Tenno with its turquoise waters and through a distinctive village located here, and then the road will take you to the shores of Lake Garda.

Everything to enjoy riding on two wheels

Cycling has a long tradition in western Trentino, so many services are available here year-round. Along the Dolomity-Garda bike path, you can find bike rentals, bike workshops, bike stores, bike maps, and a local well-developed transportation system tailored to the needs of cyclists.

In creating the Dolomity-Garda bicycle route, great emphasis was placed on the aspect of sustainability. For this reason, the starting point of the route in Malé can be reached by the Trento-Malé-Mezzana train connection, which also runs through Mezzocorona, a station on the Verona-Munich line, served, like Trento, by Trenitalia.