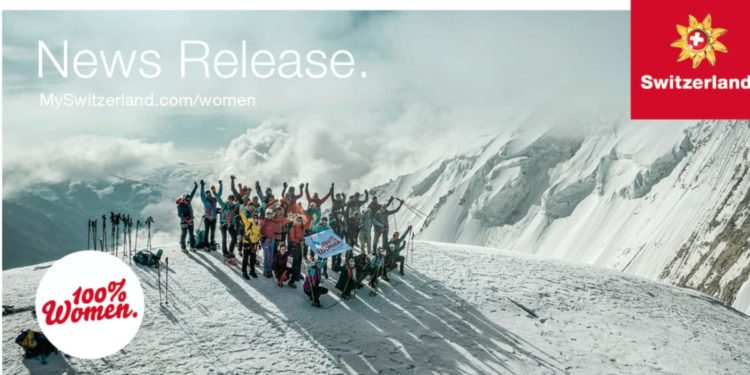 World record: the world’s longest women’s rope team is ready for the Allalinhorn

This week, 80 women, including journalists and women of influence, from 25 countries want to set a record that is unique in the world: the creation of the world’s longest women’s rope team on the Allalinhorn (4027 m). Depending on weather conditions, the climb will take place on Thursday, June 16 or Friday, June 17, 2022. The activity is part of the “100% Women” initiative launched by Switzerland Tourism, which aims to raise the visibility of women in mountain and outdoor sports and promote tourism offers for women.

Increasing the visibility of women in mountain sports and promoting travel offers that are specifically tailored to the needs of women in the outdoor sector. These are the goals of the 100% Women initiative, launched in 2021. This year, Switzerland Tourism (ST) joined forces with partners – the Swiss Association of Mountain Guides, Saas-Fee / Saas Valley Tourism, outdoor equipment supplier Mammut and Grand-Hotel & Spa Walliserhof to facilitate a unique challenge in the mountains: 80 women from different backgrounds will climb the Allalinhorn (VS) as part of the world’s longest women’s rope team. According to the partner organization, the Swiss Association of Mountain Guides and recognized experts in women’s mountaineering, the mobilization of such a large, all-female rope team is the first of its kind.

In order to assemble the most diverse women’s rope team possible, Switzerland Tourism invited women of all ages from around the world to submit their nominations in written or video form. Ten participants were selected from among the approximately 850 applications ST received, including women from Iran, South Africa, Europe and, of course, Switzerland. The rest of the team is made up of journalists and women of influence. They include, for example, Cindy Sirinya Bishop, Thai ambassador for UN Women in Asia and the Pacific, Swedish-Norwegian actress and UNICEF ambassador Eva Röse, musician and Miss France 2019 Vaimalama Chaves, and Swiss singer R&B Naomi Lareine. All women rise to the challenge while contributing to a more diverse image of mountain sports. The website MySwitzerland.com/worldrecord presents the selected women. About twenty experienced female mountain guides accompany this remarkable rope team on the way to the top.

The group of 80 women also included a representative of Poland – Daria, a philologist, lover of culture, art and mountains, promoter of WOMEN’S activities in the mountains!

I have always been in love with the mountain aura. I have been hiking since I was a child, I have been climbing for 6 years.
I’m not quite an experienced mountaineer yet, but inspired by Polish Himalayan women, I decided to cultivate women’s mountain climbing.